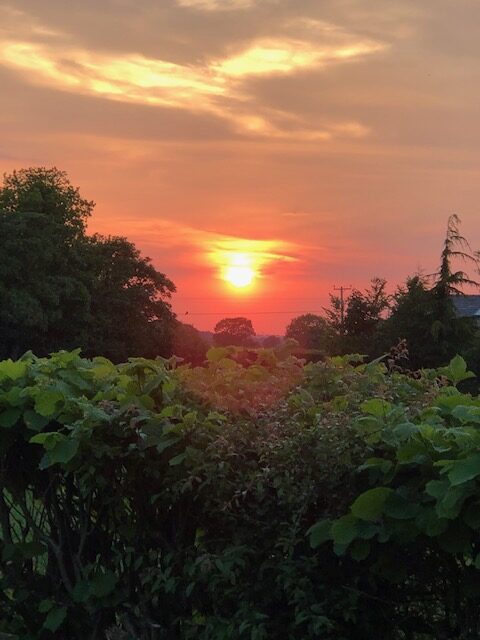 Published by Alan Camrose on 8 June 2021

This time, the pleasures of a staycation…

We have just returned from our hols. An exotic Summer holiday, in Cheshire. At Knutsford, just inside the city limits.

We went for a week, stayed in a cottage which has a hot tub in the garden, so we were able to recreate Footballers’ Wives, without the naff haircuts or the whining. The cottage had everything that we needed, and three bonus alpacas, called Tom, Dick and Harry, who provided serene audience for our antics. Not that there were many antics.

A special place in my heart for Harry’s mullet, a sneaky homage to the Beatles?

There were also three chickens, mysteriously un-named: they were the Chickens With No Name. We called them Nugget, Dansak and Run. They were shaped like ambient tea cosies. We don’t have pictures of them, for data privacy reasons. They periodically and loudly trumpeted their displeasure to the alpacas about periodically being treated like the balls for alpaca polo. Those chickens were pretty chukka. The introduction of a grey cat called Mitzi made it like a strange petting zoo where none of the creatures were available for or in the cat’s case amenable to petting.

Our Offspring did their usual trick of surfacing at a brisk 1 or 2 pm, ready for a nourishing breakfast of sausage rolls and cider. In the meantime, we loafed on the outdoor furniture and vied with the alpacas for the glory of the Loafing Award. They still won as a group entry, which was a surprise since we had fielded the Offspring. Their teamwork was immaculate, like the England back three but with more positional awareness and better footwork. They followed up by proving to be very adept at Statues, too, so something to bear in mind when Creature Statues takes over from Breakdancing in the 2028 Olympics.

We patronised an ice cream shop, a honey emporium and Tatton Park (very flowery, which is as far as my knowledge of botany takes me).

We visited friends just outside Liverpool and had a pub lunch with draft beer. And then went to a family get-together in Liverpool and drank more beer. I was not the designated driver, so all good.

This was all in the sunshine and over 20 degrees, all in a very pleasant episode of Being Somewhere Else Away From Our House.

Based on this, I’ve formed the view that staycations have a lot going for them. No jet lag, no exhausting twenty hour journeys for long haul, no PPE gear. A contrast to our previous hols to all sorts of places in foreign climes, but with much to commend it. I think we may have uncovered something…

I suspect that Ryanair will not be re-tweeting this.