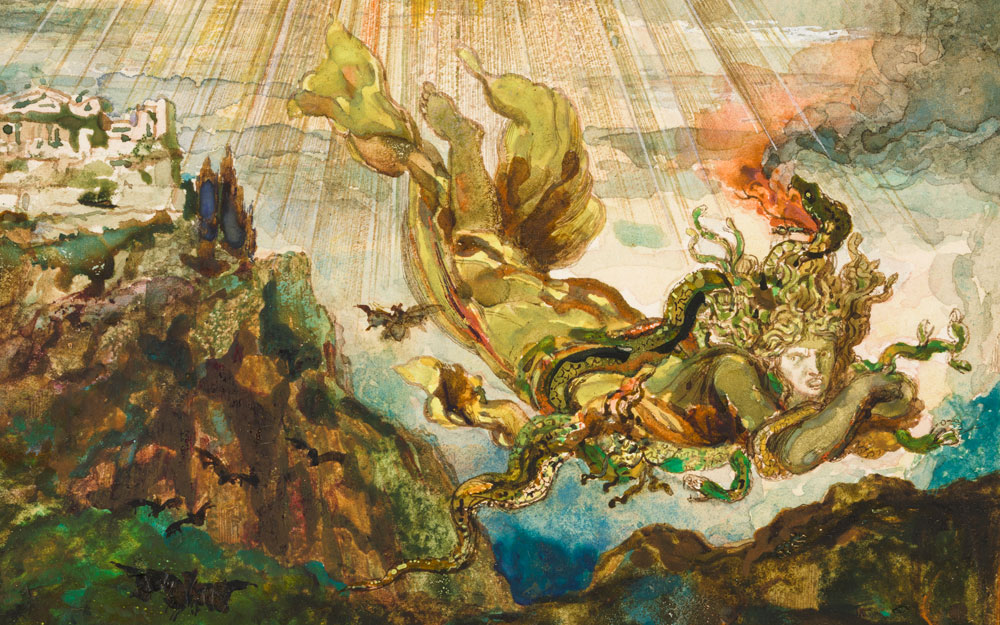 The art exhibition at Waddesdon Manor in Buckinghamshire is fabulous in the true sense of the word, derived here from fables. Magnificent and profound.

Gustave Moreau (1826-98) (he was not a doctor and did not live on an island) was a French painter who created in watercolour a suite of 64 exquisite paintings to illustrate the 17th-century Fables of Jean de la Fontaine. Those Fables were in many cases re-workings of Aesop’s Fables, telling tales of Gods and dragons, lions and golden chariots, rendered in rich detail that seems to generate its own light.

The Lion and the Gnat is probably my favourite of the paintings.

The Gnat uses his brave sting to best the mighty Lion. Then he, without thinking, trumpets his unlikely victory to the world, flies up in the air and is trapped in a spider’s web and eaten.

All opponents deserve respect, no matter how weak and feeble they may look, but arrogance from victory can lead to disaster.

The Lion and the Gnat

‘Go, paltry insect, nature’s meanest brat!’
Thus said the royal lion to the gnat.
The gnat declared immediate war.
‘Think you,’ said he, ‘your royal name
To me worth caring for?
Think you I tremble at your power or fame?
The ox is bigger far than you;
Yet him I drive, and all his crew.’
This said, as one that did no fear owe,
Himself he blew the battle charge,
Himself both trumpeter and hero.
At first he play’d about at large,
Then on the lion’s neck, at leisure, settled,
And there the royal beast full sorely nettled.
With foaming mouth, and flashing eye,
He roars. All creatures hide or fly, –
Such mortal terror at
The work of one poor gnat!
With constant change of his attack,
The snout now stinging, now the back,
And now the chambers of the nose;
The pigmy fly no mercy shows.
The lion’s rage was at its height;
His viewless foe now laugh’d outright,
When on his battle-ground he saw,
That every savage tooth and claw
Had got its proper beauty
By doing bloody duty;
Himself, the hapless lion, tore his hide,
And lash’d with sounding tail from side to side.
Ah! bootless blow, and bite, and curse!
He beat the harmless air, and worse;
For, though so fierce and stout,
By effort wearied out,
He fainted, fell, gave up the quarrel.
The gnat retires with verdant laurel.
Now rings his trumpet clang,
As at the charge it rang.
But while his triumph note he blows,
Straight on our valiant conqueror goes
A spider’s ambuscade to meet,
And make its web his winding-sheet.

We often have the most to fear
From those we most despise;
Again, great risks a man may clear,
Who by the smallest dies.

The frenzy of the lion is right there on the canvas, and the buzzing, stinging gnat, painted in a different medium – shiny gouache – to make it stand out more – is like a deadly ghost looming over the now beaten beast. But the gnat’s glowing triumph is moments away from despair and defeat in the looming darkness above.

This is flash fiction, nineteenth century-style.

I felt the need to bang the drum for this Moreau, the great Symbolist.

Featured image at top of post: Jupiter and the Thunderbolts. Not a heavy metal band.

The exhibition is still open at Waddesdon until 17 October 2021.