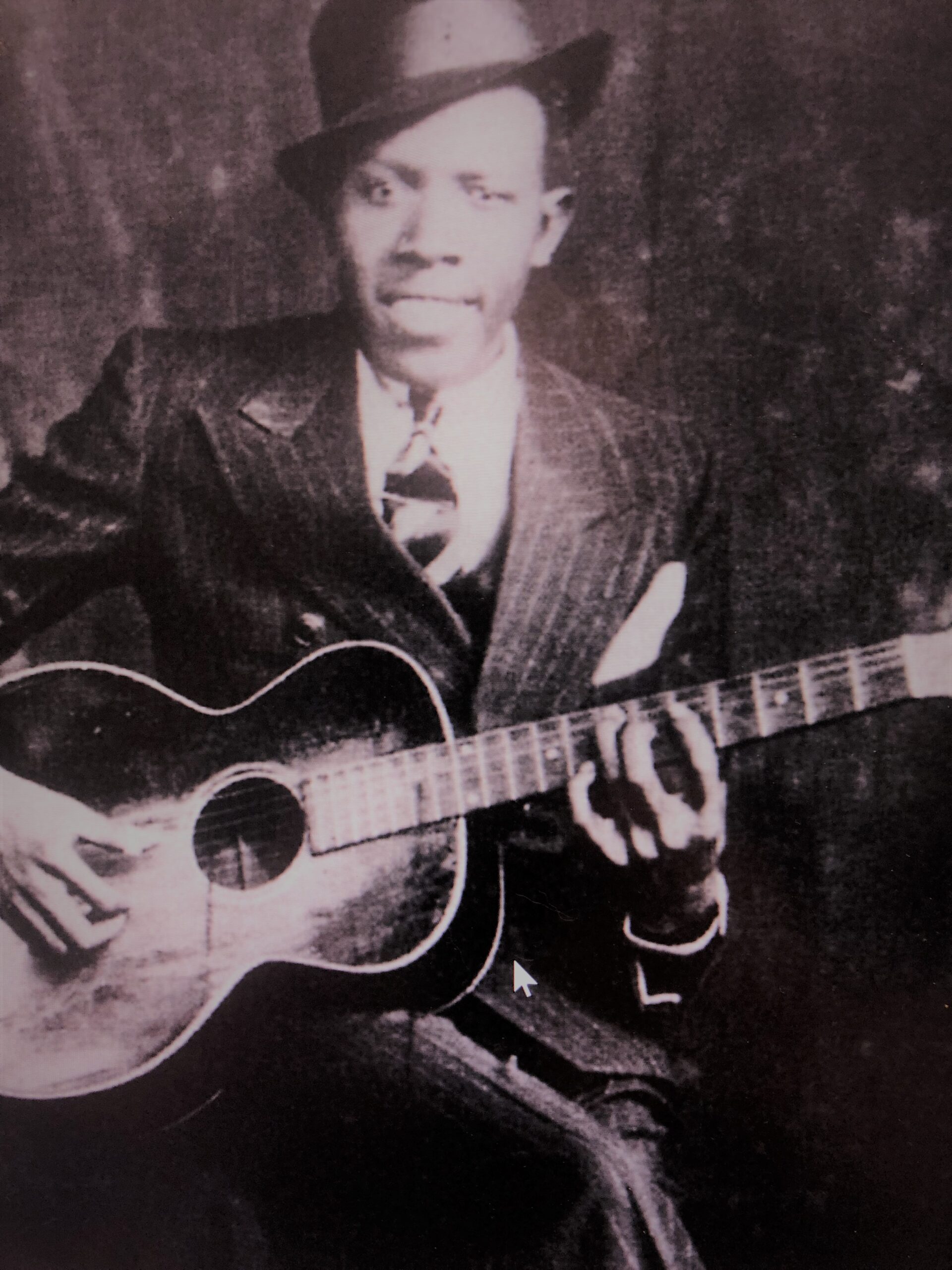 You are very welcome, and thanks for stopping by.

This time, the Devil has the best tunes, and strikes a hard bargain…

Whitesnake, and for that matter Led Zep, Cream, Elvis, everyone who has made “popular” music that matters, owes the giants of the Blues. Owes them big time. 4/4 time.

I love the blues

They tell my story,

If you don’t feel it you can never understand

Whitesnake – Walking in the shadow of the Blues

Robert Johnson (1911-1938) was not merely one of those giants, he was an unlikely Titan. He was from the home of the Blues, the Mississippi Delta. With his dapper black suit and hat in the pictures, cradling his guitar like it was part of him, he was a Blues player way before electric guitars and synthesisers. By all accounts, he wasn’t a very good guitarist at the beginning. Then, one day, he changed. A flash of light, a moment of revelation. Legend has it that he didn’t rely on technology or practising to improve. He went old school.

Did he go to that crossroads near the Dockery Plantation, Mississippi, just before Midnight, in dusty silence and start to twang at his guitar? Did he meet a man there who appeared out of the shadows with horns hidden under his fedora and a spiky tail draped under his long black coat? Did that mysterious man croon to the guitarist as Robert stared upwards into the black night sky aching for the priceless gift of talent? Did the song tempt him with the promise of fame and fortune if he would only commit to a devilish pact?

Whether or not Bob succumbed to any such temptation at the expense of his soul, he became the legendary guitar player captured in precious recordings from 1936 and 1937, which have held their value ever since and influenced generations of guitarists and singers.

One of his songs, echoing this story, was ‘Crossroads‘ (or ‘Crossroad Blues‘):

He fell on his knees and prayed to the Lord because he knew what he was about to do. A last chance for him to back down from the awful, delicious prospect of a trade with the Devil. He flagged a ride at the crossroads all day long but no-one noticed him, no-one saved him. Then, the sun went down and he was left there alone, to sink down with his insecurity and frustration and pain.

And then he received the poisoned chalice of the Crossroad Blues.

He was able to play the guitar like an…angel?

Afetr two years, he died. Suddenly and painfully. Some said he had been poisoned.

Others thought he had simply paid the price for the shooting star of Godlike talent that he had been temporarily granted, and the Devil had come for his due, taking everything with him that remained of Robert Johnson.

To this day no-one knows where his body lies. If anywhere.

But he has left an imprint on the world that extends far beyond that mysterious crossroads.

What are you prepared to buy and sell to the Man in Black at the crossroads near you?

PS Treat yourself to a different take on that song, by eric Clapton