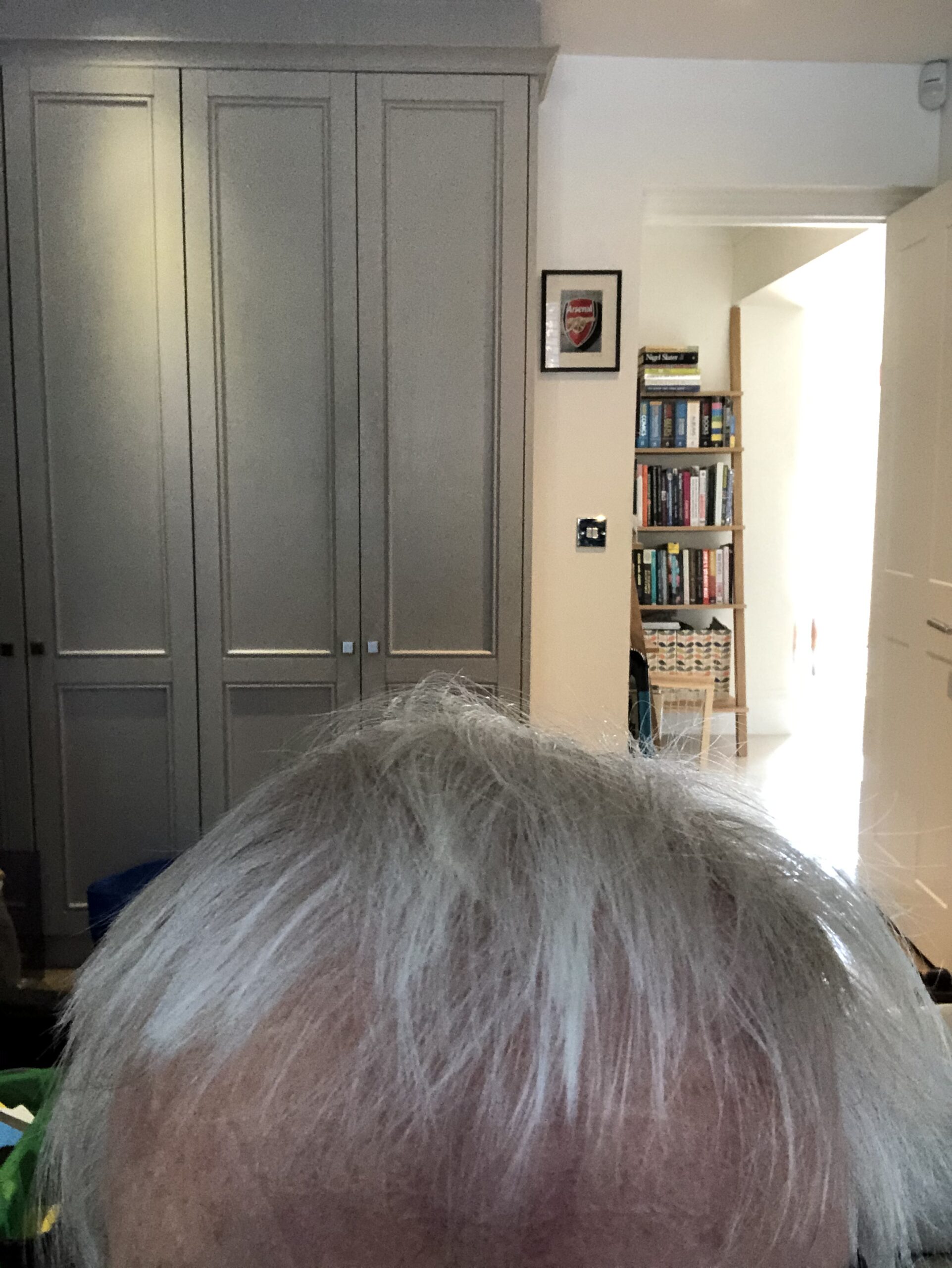 This time, the Strimmer’s Revenge…

32 degrees C and six months since my last hair-cut: a true Lockdown moment.

a) go to the barber and wear a mask, and the barber a visor and mask, to feel like I was having my hair shorn by the riot police;

b) leave my hair to carry on growing until I could play tug-of-war with Rapunzel; or

c) give myself up to the mercy of my wife to satisfy that crazed look of anticipation as she held the tiny scissors to the industrial-sized whetstone.

I woke up shackled to a small plastic chair, my knees around my ears, providing a sight-line for the first cut. Vrooom! The sound of a chainsaw engaging, snippety-snip the sound of garden shears approaching me from behind. The glug of Agent Orange shampoo being rubbed into my ends which were about to be split with an axe.

No mirror to protect me, and as Meatloaf nearly sings:

(especially when attacked by Mrs Scissorhands).

My chainmail suit at the dry cleaners, the Jaws soundtrack thundering in our bathroom, reflecting off the tiles – duh DUH dur DUHDADADADADADADA

The feel of a swathe of hair sloughing off my head and crashing to the bathroom foor like the calving of a huge iceberg, a sinister chuckle from just behind my left ear, sending a chill down my spine as I stayed rooted to the spot in terror.

Another copse of mountain trees swept away in the avalanche.

And then it was over as the massed jungle foliage that that rooted itself in my eyebrows was chopped away with a machete – what proved to be Nicola’s weapon of choice in the Hairena of Doom, or WWFluff…

Then the clouds of hair blew away revealing a work of art – more a rough sketch than the ceiling of the Sistine Chapel, but Michaelangelo had more promising contours to work with. A pretty good first attempt on the back of a three-minute YouTube coaching video (half of which consisted of ads for FIFA 21 – she snips, she scores! – and following a suspicious recent interest in regularly brushing our golden retriever as a way of limbering up).

The exciting thing is that in another few months time, unless I’m ambushed earlier at the top of the stairs with a suspiciously glinting blade – like Norman Bates with a detailer trimmer – it will be time to