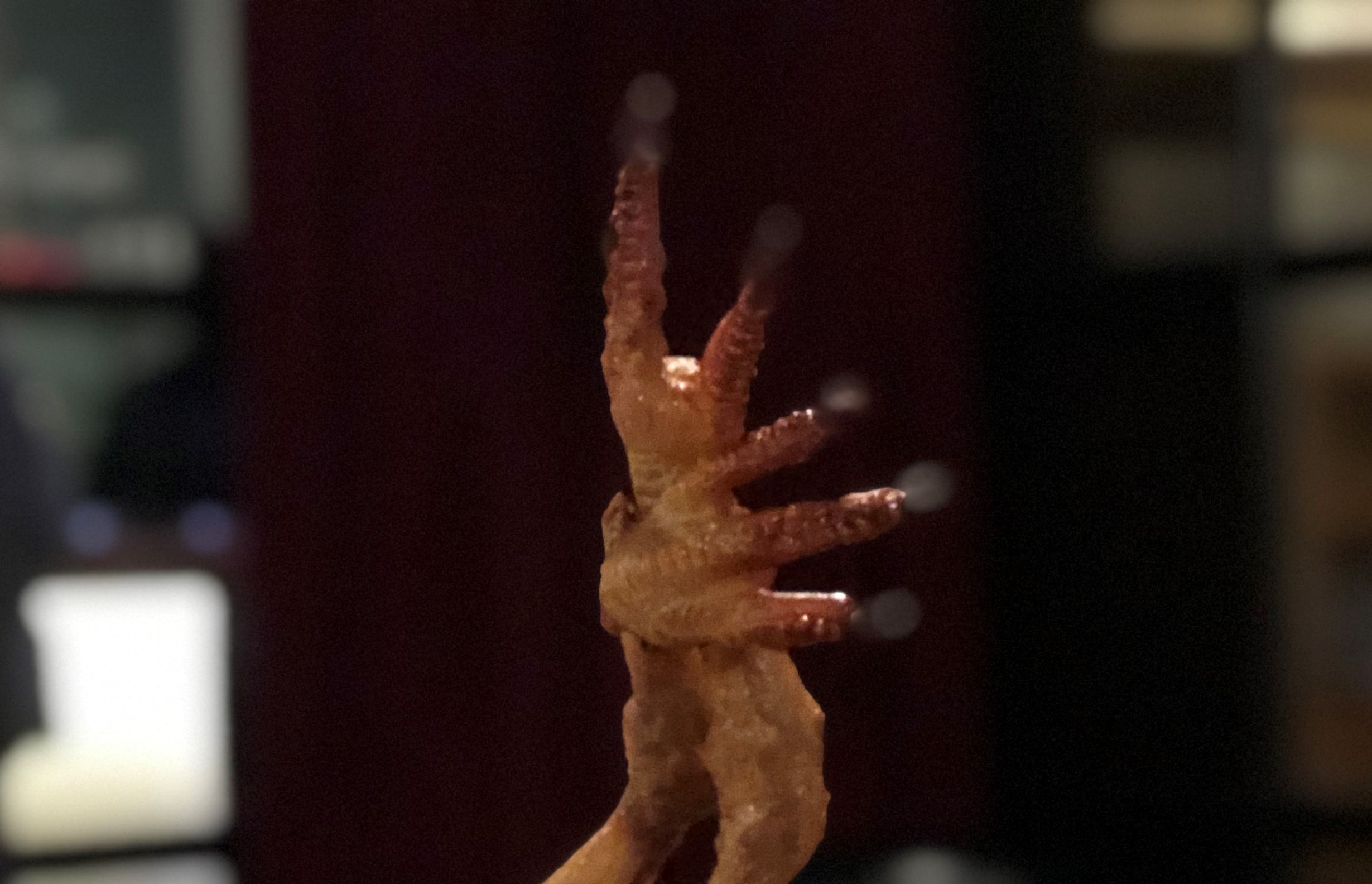 This time, come with me on a trip to Cuba and see the coming together of Santeria and roast chicken…

We wandered round the streets of Havana, Cuba drinking in the sights and some local beer. Our journey led us into a surreal world of crumbling beautiful buildings topped with optimistic modern extensions, watchful street cats, and the mysterious religion of Santeria (the Cuban version of voodoo).

That was a departure from the usual boat-like classic automobiles and challenging-coloured cocktails).

We discovered a voodoo shop around Calle O’Reilly (O’Reilly Street) in Old Havana. There must be a magic spell over it; I would never find it again, tucked away off the main thoroughfare. The street was named after the unlikely sounding Alejandro O’Reilly, 1st Count of O’Reilly of the Spanish Empire, rewarded by Spain for among other things during the course of the 18th century re-building Havana’s defences after they’d proved to have been set in the wrong place. So, who did your building work last time…?

The exotic emporium was festooned with bowls (for offerings), trinkets, candles and candlesticks, figurines of Catholic saints, necklaces, and coloured beads called elekes. The authentic, sacred versions of elekes are carefully prepared by santeros (think, priests) to reflect and guide initiates in suitable ways; other beads are…just beads.

The religion of Santeria developed undercover as a shadow of Catholicism, when slaves from Africa arrived at their new enforced homes in places like Cuba, and were discouraged from openly practising their beliefs. They used Catholic saints as avatars or proxies to cloak their own style of worship, an intriguing sleight of hand to allow them to continue to follow their old ways.

Orishas – the Santeria equivalent of selected saints – have specific colours, behaviours and powers associated with them, practitioners emerging from behind the disguise of Catholicism to make offerings of food and sometimes blood (animal sacrifices). The latter adds something of a sinister element to the religion, often over-shadowing its predominantly uncontroversial ways and discouraging open practice.

I made more of Santeria in my novel, Lost In Plain Sight, which portrays a menacing arm of the religion allowing – demanding – human sacrifice, not merely chickens.

Is this a horrific memento that I stole away out of the back of the Santeria shop allowing me to make an evil Hand Of Glory to strike fear into my enemies and lay waste to their souls?

No, It’s a roast chicken served at Hixter restaurant, Bankside, in London. It’s presented at your table done up like a, er, chicken, including a very fine looking pair of feet. Took me back to our days in Hong Kong, where chickens’ feet are alarmingly popular, espacially when employed to bait foreigners at dinner.

They’re not for the squeamish, but neither are they a monstrous display of dark magic. The chicken is moist and succulent, run through from the base with an uncomfortable nod to Edward II.

I picked out this image to illustrate the power of connection and association.

I used the concept of Santeria in my book, albeit distorted and made more alarming by the introduction of higher levels of sacrifice rather closer to home.

Here’s a passage from my book that talks about it, a taster perhaps, using authentic names but for more diabolical purposes:

EXTRACT from Lost In Plain Sight

The leader intoned in a voice that melted into the African drums and the chant as the chorus writhed in anticipation, all in time with the ancient rhythms:

‘Babalu-Aye, Oh Lord of Healing, Lord Ọbalúayé, Wise and conquering One,Your Worshipfulness Erinle, Your medical wisdom we need and implore, Lord Esu, Your Tricks and Wit are our Guide, Lord Kokou teach us your Warrior ways, Obatala, help us to create human bodies in your divine image, Lord Shango put your trust and lightning in us, Lady Aje share your bounteous wisdom and wealth, and Mistress Oya, let us know the secrets of your Maagic, we beseech you.’

The leader motioned to his entranced entourage, like a king cobra conducting at the Royal Albert Hall. They responded immediately. I am horrified to say that we responded immediately, just far enough away to escape the strangling power of the combination of beat and words and song. The circle of acolytes and spheres tightened; the intensity and volume increased. I could smell its dark ululations, feel the texture of its cloying taste, hear the jangling of harsh colours, even from where we were.

Religion covered over with religion in the real world, a chicken that tastes wonderful/ looks demonic, and the modification and distortion of reality to provide grounding for some pretty anti-social behaviour in my book. All things that were unexpected for me related to my experiences, woven into fiction because they fitted in with what I wanted to show..

Like the chicken (well, maybe those claws this time around)…